To any fisherman “home water” means the water your fish the most.  Usually it is close to home, but that isn’t necessary though it is probably no more than a day trip to fish it.  It is a place that the angler is intimately familiar with, that is, he knows where the fish can be located under any conditions and what they are eating.  He knows how to catch the fish in this body of water.  It isn’t necessarily the water the angler loves to fish, but it is convenient and as familiar as his backyard.

Though I have lived in Eastern Washington for 10 years I still am not sure what body of water is my “home water”.  The lower Snake River, lower Yakima River, and the mid-Columbia flow together no more than 5 minutes from my door.  I have fished them all but not to the extent I can genuinely say I am intimately familiar with them.  I could say that a one-mile stretch of the Naches River that drains the eastern slope of the Cascades from Chinook Pay is a stretch I know very well and there are a couple of spots that I know will hold beautiful Westslope cutthroat trout.  I also fish the Yakima Canyon every year from September to November and some years even think I have it dialed in.  Last year I started fishing the lower Yakima River, right here in the Tri-Cities of Washington.

The lower Yakima is “night & day” a different river than in the canyon, 100 miles upstream.  Up there it is cold and full of rainbow and cutthroat trout and mountain whitefish.  I love floating my pontoon up there in the fall when the water levels fall from their summer time irrigation flows.  Down here it is warm with a whole different variety of fish, including bass, catfish, carp, etc.  Salmon and steelhead do run through here at different times of the year on the spawning runs.

Anyway, our friend Tim lives in West Richland with the river, literally, in his back yard and he loves floating it in his float tube fishing for smallmouth bass. Tim has made me a believer and you can’t beat the convenience of fishing close to home.

The river flows have been all over the board this spring but over the last weekend they dropped below 3000 cfm and was running relatively clear, so we made a plan to fish Tuesday.  I was hoping it was high enough to float my pontoon (in the fall it is too low and requires a lot of dragging).  Turns out at around 2500 I did scrap gravel bars a couple of times, but I just love floating a river in that boat.

Because of the summer (full river) flows we planned a much longer float than we would in the fall, though still a full day.  We rigged up light spinning gear with plastic baits and launched around 7:30 AM.  My first cast before leaving the launch was rewarded with a hard fighting, if not small, bass – good omen.  Our 9.5-hour float was longer than we had planned, but we fished a few nice spots longer than we probably should have.  I wasn’t counting, but am confident we each caught over two dozen bass.  Most were small, but a few reached the 2-3 pound class.

The high-lite of the day occurred not far from the launch when Tim hooked a carp that I estimate probably went 10 pounds or better.  Put his light rod to the test and dragged him 100 yards down river. 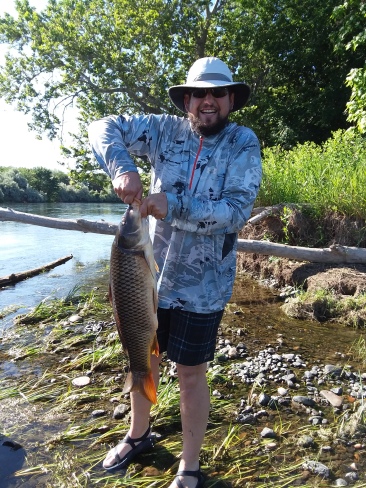 While I do love fly fishing the Central Washington trout rivers, I think these home waters will see a lot of me this summer and I’ll save a lot of money on gas.