As mentioned in my last post, I took two camping/fishing trips to the lower Yakima River Canyon this fall.  On this trip I was joined by Tim, Amy, and their dog Haley.  Later my friend, Larry Broder pulled in with his trailer and a cameo visit by his wife Sue.  Sue was attending a Casting for Recovery event at the Canyon River Ranch.  My son-in-law, Nate Boggs, also made a cameo appearance one evening to say hi.

Being early October, I had my choice of campsites when I showed up Thursday morning, so I picked my favorite site #1 right next to the launch ramp.

Fished a bit Thursday late afternoon and evening down stream from camp with limited success, but the heavy Blue-Winged Olive (BWO) spinner fall boded well for the trip.  The weekend would provide the heaviest hatches of these diminutive mayflies I have every experienced on the Yakima.  Enjoyed a peaceful campfire with a bowl of Darryl’s chili.

Tim and Amy showed up the next morning.  The sky was threatening rain as we made our plan for the day; Amy and the dog would be hiking around camp while Tim and I would do a float from Red’s Fly Shop back to camp.

I did end up raining for most of our float, but as is the case with BWOs the foul weather brought on a significant hatch.  Unfortunately, the prolific hatch didn’t translate into the spectacular fishing it should have been we caught some fish, including a large rainbow that got me to dig out the camera. 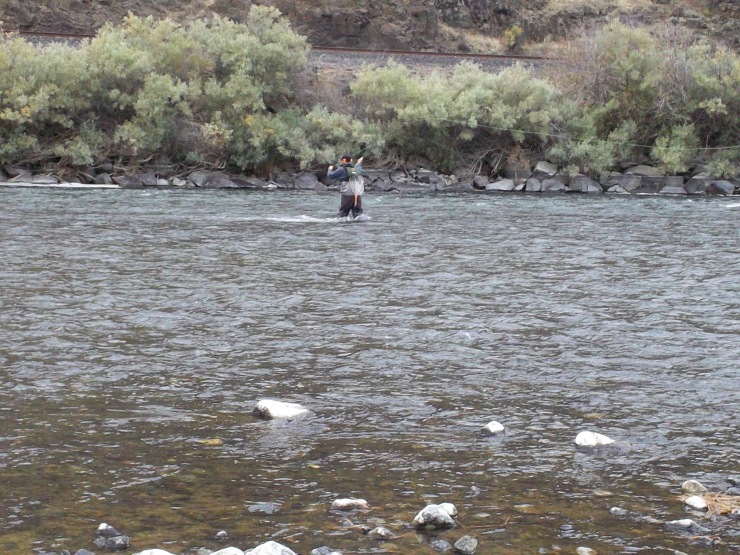 Saturday Larry wanted to fish the Naches River up higher than we usually go.  So after scoping a number of pull-offs we picked a particularly lovely section of this wonderful river.  While rigging up some folks pulled in and I noticed the NY plates on their trailer.  They are from Chaumont Bay on Lake Ontario where my father, brother-in-law, and I took many camping/fishing tips.

Our day on the Naches involved a lot of little fish, an eagle flyby, and lovely weather. 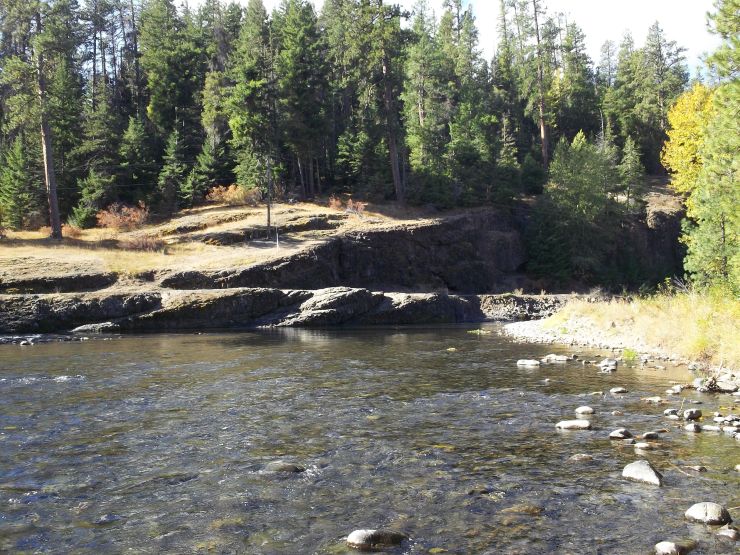 Amy needed to get back home on Sunday afternoon but agreed to drop Tim and I off for a short float so they could leave by 4:00.  She dropped us and our boats off at the Lmuma ramp on a beautifully sunny and cool morning.  This would be a relatively short float so there was time to hit a handful of spots and fish them thoroughly.  While the BWO hatch came off most of the day the fishing was quite slow.

When we got back to camp Amy heated up some of her chili while we peeled off waders and stowed our boats and gear.  While enjoying chili and beer(s) I convinced Tim to spend the night and use up the pile of firewood he brought.  We waved goodbye to Amy and lit the last fire of the trip and possibly the season.