As I frequently do these days, I was thinking about how many events in my life have been lost or at least the details are becoming a bit foggy around the edges.  I am confident, however, that the nugget of many of the best events will stay with me forever.  An example would be a time Mom joined Dad and I one evening fishing Keuka Lake in New York’s Finger Lakes Region, where I grew up.  This evening sticks out, first, because Mom rarely joined us and a particular fish she caught.  Mom grew up with fishing fanatic father, so she knows which end of the rod the reel goes on.  I believe she and Dad fished some when dating and before my sisters and I came along.

I don’t recall how old I was at the time but this was probably in the 60’s when I was a teenager.  We were fishing out of Dad’s 12-foot aluminum boat, which he replaced with a small Boston Whaler around the time I went away to college (1969).  This would have also been when my sister Donna would have been a teenager, sister Sue a pre-teen, and Bev a preschooler.  I expect Mom was able to join us because Donna was available to babysit.

Anyway, in those days Dad and I frequently fished with nightcrawlers impaled on what we called a “worm rig” consisting of three snelled hooks in a series behind a few beads and small propeller-type spinner blade.  We would slowly drift with the wind around the weed beds at the north end of the lake.  Often running out right after dinner on cool summer evenings for a few hours.  A good deal of time would be spent removing snagged weeds from this rig.  It was successful in catching most any fish that is present in the lake.  Some of the largest bluegills I’ve ever seen, yellow perch, rock bass, even pickerel, but the prized catch was always bass, both large and smallmouth.  Dad fished for bass on Keuka Lake all of his life, saying that the bass fishing continued to get better than when he was growing up in the 20’s and 30’s (evidence below) 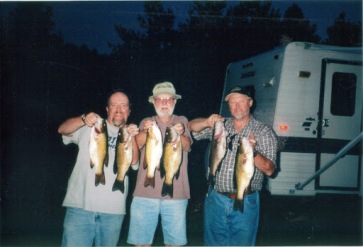 Left to right me, Dad, Barry 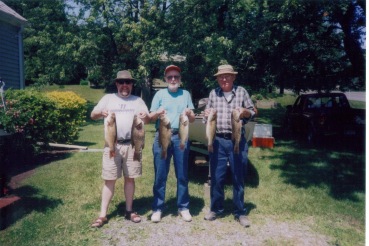 Left to right me, Dad, Ozzy

The evening Mom joined us was a beautiful summer evening, cooling off after a hot day.  In our usual formation Dad sat at the stern, Mom in the middle, and I sat in the bow of the small boat.  Not much was happening other than enjoying a beautiful evening telling stories and making camping plans.  At one point Mom had snagged a mass of weeds on her line and began hauling it back to the boat with the familiar “pump up and reel down” maneuver.  As the mass came close to the boat I noticed that each time she reeled down the slack lined dropped the worm rig so it dangled below the weeds.  I’m guessing you are already anticipating what happened.  Just as I noticed this a good-sized largemouth bass came shooting out from under the boat to grab that dangling worm and head back to the bottom.  Needles to say Mom was startled and sat there with death grip on the now doubled over rod.  Without saying a word, Dad demonstrated his amazing reflexes by reaching over and pushing the button on Mom’s spincast reel releasing the line protecting both the line and the rod.  Mom regained her composure to bring the big bass along with ten pounds of weeds to the landing net.

There were a lot of laughs and reliving of the evening as we made our way to the boat ramp and after.  When I look back on this fun evening I can only wish that Mom joined Dad and I more over the decades we fished together.  Will have to see if she remembers this story as well as I do on my weekly phone call.

1 thought on “Fishing With Mom”