As promised, here are some pictures from a kayaking trip with (you guessed it) Catherine and Eugene to the Ocala National Forest on Juniper Creek.  This was a wonderful afternoon trip in the cool, crystal clear waters of this spring feed creek.  Catherine advised that we purposely start as late as possible to avoid being overtaken by faster kayakers allowing us to leisurely enjoy the surroundings.  This worked out pretty well.  We did encounter a family horribly out of their element in a canoe that was stuck against a deadfall – they were having a hell of a time and just didn’t know what they were doing.  I was able to ‘rescue’ them from the deadfall (and not get eaten by a gator in the process).  Darryl and Catherine also had the pleasure of watching a local get bitten by a water moccasin while attempting to grab it out of the water – alcohol may have contributed to this incident.  I believe this trip was in late-April or early-May of 2007.

I have to say that paddling this very small creek with river bend banks at eye level, the thought of a gator encounter was a bit unnerving.

Darryl launches.  Note how clear the water is.

Snack break on the river.

To me this picture captures Eugene.

Note the cooter (turtle) diving in the creek at the far left of the little island as Eugene and Catherine approach. 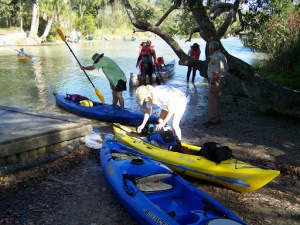 The take out.  That is my yak in the foreground.  The guy looking skyward is the father of the family I ‘rescued’.  He was pretty glad that trip was over; though not nearly as glad as his wife.  The ranger had been waiting on them for the shuttle back to their car.  That is Catherine out in the river near where the Cracker impaled himself on a water moccasin moments before.